How does one live on the Mediterranean today in times of global epidemic? The project develops an up-to-date literary portfolio of the Mediterranean. The virtual postcards sent by authors and contributions by expert will open up spaces for projects and discussions.

Literary Mapping of the Mediterranean

International authors and guests will gather in Split from 27/11 - 5/12 2021.
Program Festival Split Lit

The Mediterranean beyond the glossy brochures of tour operators is marked by political, ethnic and religious tensions, by migrations and unemployment, by climatic changes and worries about the future. The pandemic has dampened the bubbling of these difficulties, but not solved them, on the contrary, it is to be feared that the economic consequences could be fatal for tourism, an economic sector that is also otherwise fragile. The aim of the project is to give a voice to the authors of this region, which is astonishingly rich in traditions, natural beauty and political problems, to promote their exchange and to bring their intellectual and aesthetic impulses to the square - Agora - and to other discussion spaces - Salon.

Following the tradition of the European salon and the Mediterranean agora, experts from science, business, civil society and the media will work together with writers and artists on ideas and visions for a peaceful and promising future of the Mediterranean.

Fences are being erected at the intersections of the three continents whose coasts encircle the Mediterranean. On the southern and eastern coasts there are demographic and climatic problems, wars and poverty; on the northern coasts there are often mafia, corruption, environmental problems and commercial exploitation of resources. The population of the tourist areas is transformed into waiters and maids of the “resorts”; the former philosophers, artists, inventors, seafarers and traders who shape our notion of Mediterranean culture have died out or emigrated to the North. In northern Europe, there is little understanding of these problems - all too beautiful is the ancient dream of Arcadia.

This project addresses the European public and invites them to reflect on this situation on the ground, to reflect artistically and intellectually on the beauty of the Mediterranean without closing their eyes to the problems that prevail in the region. 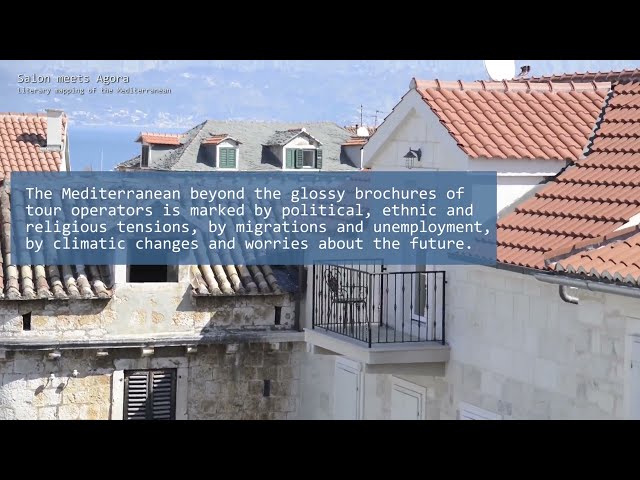