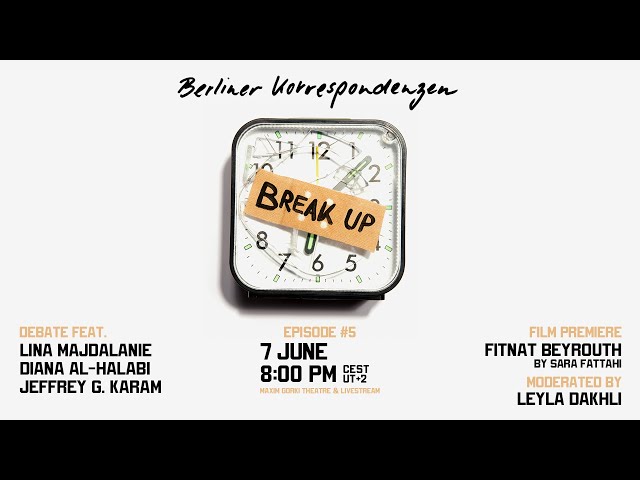 Live on stage at the Maxim Gorki Theater Berlin

How do you stay strong when you are far away while your home is falling to pieces? The closing event of the series “Break Up” zoomed in on a specific topic with wide-ranging implications: how do Lebanese artists and thinkers in exile deal with the turbulent events back home, from a revolution in 2019 to the horrendous explosion in Beirut’s harbour in 2020, to the ongoing state crisis today? How do you think, work, and live in two places at once?

The event kicked off with the premiere of a new film by acclaimed Syrian director Sara Fattahi – an intimate portrayal of Rotterdam-based up-and-coming artist and feminist activist Diana Al-Halabi. It is a reflection on distance, longing, anger and creativity. In the subsequent debate, Al-Halabi joined veteran Lebanese artist Lina Majdalanie and scholar and activist Jeffrey G. Karam, discussing how transnational solidarity and critical activism work in times of continuous crises and of social media, and what role feminism plays in shaping Europe’s and Lebanon’s future. The conversation was moderated by historian Leyla Dakhli.

Lina Majdalanie is a celebrated Lebanese performer, director and playwright based in Berlin. Among her most recent works are the video series Second Look (2020) and the performance Sunny Sunday (2020). She has curated programmes such as Relatively Universal (HAU-Berlin, 2017) and Beyond Beirut (Mousonturm-Frankfurt, 2016) and taught in Geneva, Amsterdam, Berlin and Karlsruhe.
©own, photo cropped & desaturated
Diana Al-Halabi is a Rotterdam-based interdisciplinary artist born in Lebanon. Through an intersectional feminist lens, Al Halabi’s practice ranges from the personal to the political, tackling notions such as patriarchal cognitive anthropometry, institutional violence, disabling bureaucracy, settler colonialism, and the visa regime.
©Sarah Ibrahim, cropped & desaturated
Jeffrey G. Karam is an Assistant Professor of Political Science at the Lebanese American University and a non-resident research associate at Harvard University’s Middle East Initiative. Karam is currently a visiting research fellow with the Global Scholarly Dialogue Programme of the Rosa Luxemburg Stiftung, a Fellow at the Forum Transregionale Studien’s Europe in the Middle East-The Middle East in Europe program, and a research affiliate at the Center for Middle Eastern and North African Politics and the Otto-Suhr Institute of Political Sciences at Freie Universität Berlin. Karam is a scholar and activist between Beirut and Berlin. He is the author and editor of numerous publications, including The Middle East in 1958: Reimagining A Revolutionary Year (London: I.B. Tauris and Bloomsbury, 2020). Karam is the co-editor of the forthcoming book, The Lebanon Uprising of 2019: Voices from the Revolution, which I.B. Tauris and Bloomsbury will publish in October 2022.
©own, cropped & desaturated
Sara Fattahi is a Syrian-born independent filmmaker and producer based in Vienna. She studied Law and Fine Art in Damascus and worked as a storyboard artist & animator for several TV channels. Her feature length documentaries Coma (2015) and Chaos (2018) have been screened at international festivals and won numerous awards. Her work often deals with questions of war, exile and trauma.
©own, cropped & desaturated
Leyla Dakhli is a full-time historian at the French Center for National Research (CNRS), presently resident at the Marc Bloch Center in Berlin. Her work deals with the study of Arab intellectuals and social history of the South Mediterranean region, with a particular focus on the history of women and the question of exiled intellectuals and activists.
©Alun Be, cropped & desaturated