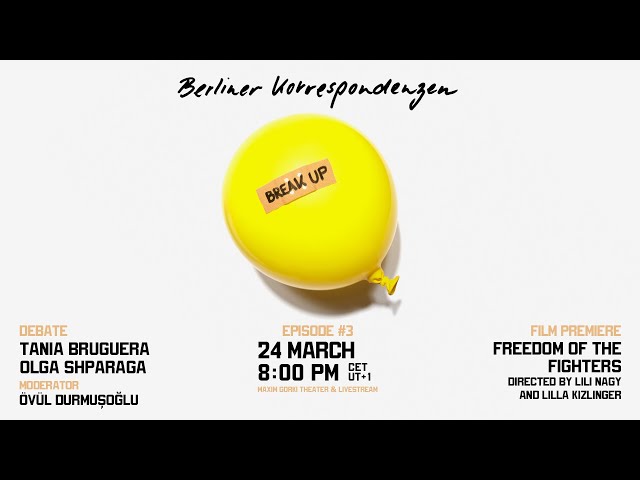 In German and English (with simultaneous interpretation)

Live at Maxim Gorki Theater Berlin, an livestream in English and German online

Can the art in resistance (“wehrhafte Kunst”) show us ways out of authoritarian systems? Feminist voices from Belarus, Cuba, Hungary and Turkey discuss the relationship between art and protest during the third episode of “Break-Up”. The world-renowned political artist Tania Bruguera from Cuba meets the Belarusian philosopher Olga Shparaga, who took part in the protest against the Lukaschenko regime in 2020 and was sentenced to a prison term for her activism. In conversation with curator Övül Durmuşoğlu from Turkey, they reflect on the possibilities of collaborative, critical art to resist oppression and develop utopian perspectives.

The discussion follows the premiere of the experimental short film Freedom of the Fighters by the young Hungarian directors Lili Nagy and Lilla Kizlinger. They document performances and artistic interventions conceived during the occupation of the University for Theatre and Film Art SZFE in Budapest in 2020. In playful and imaginative reenactments, the performances given by the FreeSZFE movement – which was the topic of the second episode of “Break-Up” – are transformed and conserved at the same time.

Tania Bruguera ranks among the most important contemporary artists. In her installations and public performances, the daughter of a Cuban revolutionary often intervenes in pressing political debates. In articles, talks and speeches she also theoretically reflects on the relationship between art, activism and ethics. Her works have been shown at documenta 11, the Venice Biennale, at the Centre Pompidou and Tate Modern, among others.

©own, photo cropped & desaturated, CC3.0 - Link
Olga Shparaga, born in 1975, teaches philosophy at the European College of Liberal Arts in Minsk. She is a member of the feminist group in the Coordination Council, the political organ of the opposition against the dictator Alexander Lukaschenko. She is currently a fellow at Berlin’s Wissenschaftskolleg . Her latest book, “The Face of the Revolution is Female”, was published in German by Suhrkamp in 2021.
©Lia Villares, cropped, CC3.0
Övül Ö. Durmusoğlu (b. 1978) is a Berlin-based curator, author and teacher. In her work, she examines the intersection of contemporary art with politics, critical and gender theory and pop culture. She worked as a curator for the festival steirischer herbst in Graz, the Istanbul Biennale and the autostrada Biennale Prizren, among others. Her texts have been published in Texte zur Kunst and Frieze. She is currently visiting professor at the Graduate Schoolof the University of Arts Berlin.
©Christina Dimitriadis, cropped & desaturated
Lili Nagy is the director of numerous short films. Her visually striking, often complexly choreographed and darkly comic films engage with questions of gender, seduction and media consumption.
©own, cropped & desaturated
Lilla Kizlinger is a director and actress. For her role in Forest - I See You Everywhere by Bence Fliegauf, she was awarded the Silver Bear for best performance in a supporting role at the 2021 Berlin Film Festival.
©own, cropped & desaturated