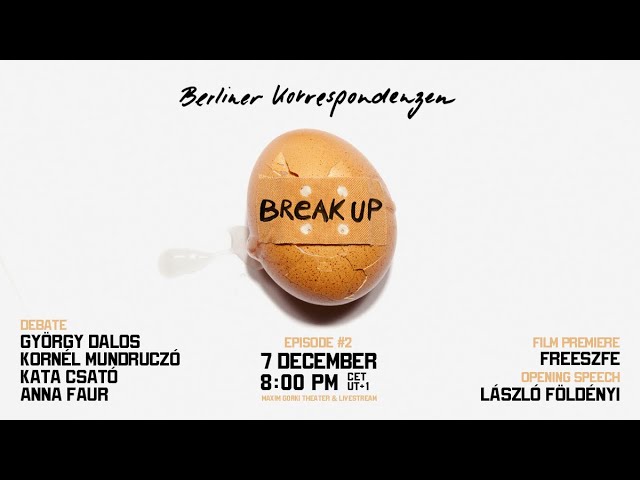 With an opening speech by László Földényi

An intergenerational dialogue on the political situation in Hungary was at the heart of the second episode of “Break-Up“ the new series of Berliner Korrespondenzen. In 2020, students occupied SZFE, the University of Theatre and Film in Budapest, to protest against its privatization and the instalment of pro-government leadership. The collectively produced documentary FreeSZFE captures intense moments during the blockade. We witness all-night impassioned debates, activist role plays and wild protest art—as well as the birth of a truly democratic counter-movement against the so-called “illiberal democracy” of the current Fidesz government. Out of these protests grew the FreeSFZE Society, dedicated to free education and the accreditation of the degrees of the boycotting students. The movement has since seen enormous solidarity among the national and international cultural scene.

In the subsequent debate, three generations discussed the protest movement, which is unique in recent Hungarian history, putting it into historical, cultural and political context. Like few others, the writer and historian György Dalos—who witnessed the popular uprising of 1956 as a teenager—manages to connect his eventful biography with the history of his home country. The theatre and film director Kornél Mundruzcó is not only one of the most successful contemporary Hungarian artists, but a graduate of SZFE himself. The puppeteer and teacher Kata Csató is currently president of FreeSZFE, responsible for independently teaching students and allowing them to finish their education. The moderator Anna Faur is also a part of the movement and a co-director of the documentary short film. At the beginning of the event, the renowned essayist and cultural critic László Földényi—the 2020 recipient of the Leipzig Book Award for European Understanding—will give a speech, drawing on his experience as a former professor at SZFE who quit his job in solidarity with the protesting students.

You can watch previous editions here.

György Dalos, born 1943 in Budapest, is an independent author and historian. The formerly dedicated communist studied in Moscow in the 1960s and was member of the Hungarian CP before being banned from working and publicizing because of “subversive activities” in 1968. In 1984 he received a fellowship of the German Academic Exchange Service in Berlin. He went on to work at the research facility on Eastern Europe at the University of Bremen. In addition to his writing, he worked for numerous German broadcasters and newspapers, was head of the Hungarian Cultural Institute in Berlin and a board member of the Heinrich Böll Foundation. In 1995 Dalos received the Adelbert von Chamisso Award and in 2010 the Leipzig Book Award for European Understanding. He lives and works in Berlin.
©own, photo cropped & desaturated, CC3.0 - Link
Kornél Mundruczó is successful internationally both in the field of theatre and cinema. His plays and movies have been shown at the most prestigious festivals of the world. Since 2003 he has been working for the theatre, founding the independent company “Proton Theater” with Dóra Büki in 2009. His play Imitation of Lige was nominated for the German Faust Award in 2017. Since Johanna (2005) his films have regularly been shown at the Cannes Film Festival, where he received the FIPRESCI-Award for Delta (2008) and the award of the section Un Certain Regard for White God (2014). For her role in Mundruczó’s Netflix production Pieces of a Woman, Vanessa Kirby was nominated for the Oscar in 2021. Mundruczó studied at the University of Theatre and Film in Budapest.
© Viktória Petrányi
Kata Csató is a professional puppet theatre director, actress, teacher and cultural manager. Since 2004 she has been working as an independent actress and director. She develops plays and teaches puppet theatre acting and directing. Her works have been shown in different cities in Hungary and internationally in Lithuania, Serbia, Rumania, Russia and Poland. She received numerous awards, for example at the Children’s Theatre Festival in Subotica, Serbia, and at the International Puppeteering Festival in Kurgan, Siberia. She was educated in Pécs, Hungary, and Białystok, Poland, and holds a PhD. She is a founding member of the FreeSZFE Society, becoming its president in the autumn of 2021.
©own, photo cropped & desaturated
László F. Földényi was born 1952 in Debrecen (Hungary). He is an art historian, scholar of literature and essayist. He counts among the most important contemporary Hungarian intellectuals, with thought-provoking books innovatively connecting the history of literature, fine arts and philosophy. His most recent book on Caspar David Friedrich’s pre-cinematic notion of seeing (Der Maler und der Wanderer: Caspar David Friedrich und das Urkino) was published in German in 2021. Földényi edited the collected works of Heinrich von Kleist in Hungarian. Since 2009 he has been a member of the German Academy for Language and Poetry. He received numerous prestigious awards, such as the Friedrich Gundolf Award and the 2020 Leipzig Book Award for European Understanding. Until 2020 he was a professor of art history at the University of Theater and Film in Budapest. He lives and works in Budapest.
©Zoltán Hosszu, photo cropped
Anna Faur is a filmmaker, film scholar and funding member of the FreeSZFE movement. She worked as an assistant on sets of Peter Greenaway, Miklós Jancsó and Kornél Mundruczó, among others. She has directed numerous short films and documentaries. Her feature debut, Lányok (2007), was shown at the festivals in Cannes, Rotterdam, London and Los Angeles. Faur received a PhD in 2021 with a thesis on the therapeutic potential of film. She was assistant professor at the University of Theatre and Film in Budapest until she left the institution in protest and co-founded FreeSZFE. She is a co-director of the eponymous documentary short film.
©own, photo cropped & desaturated
The FreeSZFE Society is a network of European higher education institutions as well as members of the blockade of the Budapest University of Theatre and Film SZFE (including students as well as teachers). Its aim is to enable the former students of SZFE to receive internationally recognized degrees. Practically speaking, the participants founded a joint international higher education institute that is also a civic, non-profit society. More information on FreeSZFE as well as the programme “Emergency Exit” can be found here.