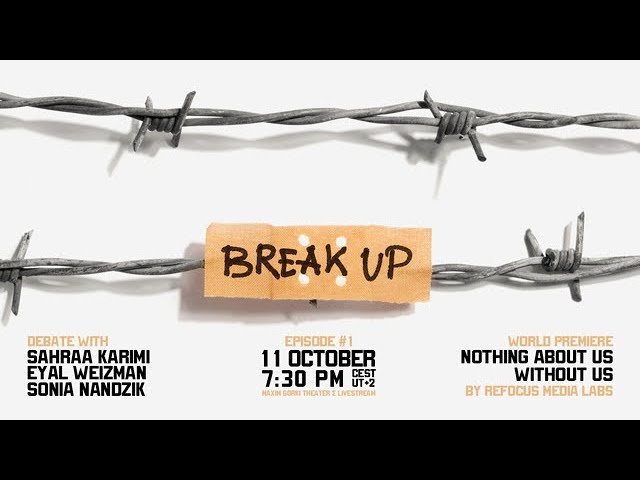 World Premiere: Nothing About Us Without Us, a documentary short film by Refocus Media Labs

Break-Up, the 2021-22 edition of Berliner Korrespondenzen, looks at the tensions and cracks in the social fabric of post-Covid Europe, asking how younger generations organize protest, voice discontent, take responsibility and imagine alternative futures. To really engage with the next generations’ dreams and grievances, each event combines the screening of an exclusive documentary short film by talented filmmakers with intense debates featuring high-profile thinkers, artists and activists.

This edition’s opening event started with the world premiere of Nothing About Us Without Us by Refocus Media Labs, a collective of refugee filmmakers from Lesvos, Greece. The film asks questions: how can asylum seekers tell their own stories, counter stereotypical media images and shape the political debate in Europe? After the disastrous retreat of the NATO forces from Afghanistan, European politicians quickly resorted to familiar patterns of fearmongering against a possible new movement of refugees. However, the people directly affected and those who have long suffered from EU migration policies had little influence on this political discourse. It seems that little has changed since 2015.

In the ensuing debate, prize-winning Afghan filmmaker and activist Sahraa Karimi, renowned researcher and human rights defender Eyal Weizman and Douglas Herman from Refocus Media Labs discussed how images can influence politics, how we can practice solidarity in times of humanitarian crises and how the subjects of media reports can become the authors of their own stories. In order to not only talk about, but also with those at the heart of the discussions, the film’s co-directors Yaser Akbari and Nazanin Foroghi were connected via video live from Levos.

The event was be hybrid – with a live audience at the Maxim Gorki Theater  and a parallel livestream online.

You can watch previous editions here.

Sahraa Karimi is among the most prominent Afghan film directors. Her documentary and fiction films offer intimate and complex insights into the lives of women in Afghanistan. They have been shown at international festivals, winning multiple awards. Karimi was the first female chairperson of the Afghan Film Association. After her recent escape from the country two days after the fall of Kabul, she has been a vocal critic of the Taliban takeover of Afghanistan and a prominent advocate for the rescue of Afghan cultural workers. Karimi holds a PhD in cinema and filmmaking from the Academy of Music and Performing Arts in Bratislava, Slovakia.
© ChanceD, cropped, desaturated, Creative Commons 3.0 - Link
Eyal Weizman’s work transcends the boundaries of critical theory, political activism and architectural research. He is the founding director of the groundbreaking research agency Forensic Architecture (FA) at Goldsmiths, University of London. FA’s unique counter-investigations into human rights violations by states and corporations use innovative techniques such as open source research, 3-D modelling, spatial and architectural analysis. FA’s works have dealt with violence on the European borders, rightwing extremism in Germany and political murders in Turkey, among others. Its findings have been shown in courtrooms, on news media and at cultural institutions. Weizman is the author of over 15 books and professor of spatial and visual cultures at Goldsmiths.
© Ekaterina Izmestieva, cropped, Creative Commons 2.0 - Link
The NGO Refocus Media Labs aims to equip asylum seekers with modern media creation skills and provide them with a platform to showcase original work and share their stories. Works by the collective have been shown at international film festivals, and its members regularly collaborate as citizen journalists with news media including the BBC and Al Jazeera. Founded by Sonia Nandzik and Douglas Adams, the NGO has been active on the island of Lesvos, Greece, since 2017 – building up a community of young media producers, presenting workshops, giving classes and producing first-hand stories from the frontline of the so-called refugee crisis.